Who killed Chris Cornell and Chester Bennington and why?

I have had the #57 Dream again and it keeps coming back since the murder of Prince at age 57.

The reoccurring  theme is 57 and it has appeared in the deaths of many since Prince.  Inside the Vortex of Illuminati usual numerology 11,22,33 and the vortex 3,6,9 is this number 57.

It has been in many deaths from Roger Ailes, Brzezenski and Beranton Wisenant Jr. It also come in the form of the deaths of Chris Cornell and Chester Bennington who died  in connection at ages 52 and 41, ergo 57. The Vortex indicates 5 as war and 7 as the wildcard. The unpredictable or "Black Swan" This is the also the prevailing media hype to include Russia Iran and North Korea.

Filter frontman Richard Patrick told ABC News Radio that he saw Chester Bennington at Chris Cornell’s funeral, “I was absolutely shocked that Chester committed suicide. I was shocked. I mean, the reality is that he seemed to have everything going on.

Now the information is coming out. Here is some gematria and theory with the sacrificial Kabbalah that runs through the industry.  I know the #57 is Donald Trump and the grand scheme for the event under his conspiracy presidency. With the Dates I have laid out from the August 7th (7) to the September 23rd (5) date I suggest that some major shift, event or change is coming. 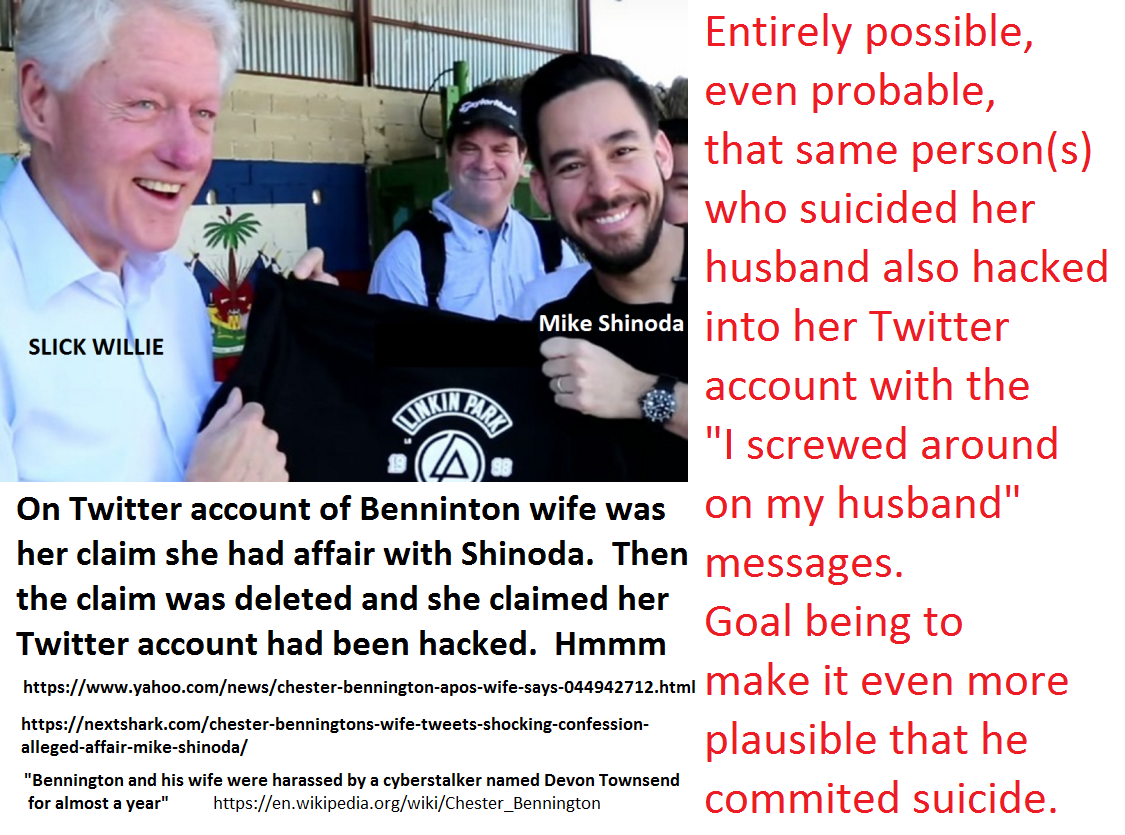 Can they sell you on dual suicides?  There's a big brew brewing and beyond the Clintons, Trump, the Jesuites and Crypto-Joos, the really big concert is about to start. Linkin and get ready for the real Soundgarden. If MK=Ultra is involved I would not be surprised but I suspect it all runs up to something much bigger in the scheme of the NWO transformation.

A massive and powerful , extremely shallow scalar earthquake assault was conducted on Putin's Russia today. It is clear the Putin team has continued to undermine US plans since Ukraine takeover was done and Crimea was the start. Now the Trump swamp has upped the ante on Russia.  The HAARPING was 7.7 Magnitude which is the TRUMP signature. It appears to be a 8-10km depth which is clearly a scalar assault at that magnitude .
Nikol'skoye, Russia

The epicenter of the magnitude-7.7 earthquake was located about 123 miles (199 km) east-southeast of Nikol'skoye, Russia, according to the USGS.

All areas within 186 miles (300 km) may see hazardous tsunami waves, the PTWC said. This includes part of the eastern Russia coastline.

At this time, there is no tsunami threat for the coasts of Washington, Oregon, California or Hawaii.

As we know the real Russia deal is all about Rothschild Banks, Ukraine, Syria regime change and the ongoing freezing of Russia's US accounts under the Magnitsky Act.

All the election bullshit is just as advertised. Trump is a fraud and the swamp is a bipartisan effort spearheaded by the Alzheimer ridden John McCain who is getting a fresh blood transfusion from Russian babies. Putin stopped letting the adoption of Russian babies to US, just to piss McCain off.  Now the Manchurian has to settle for Syrian or Balkan babies.

I expect the hottest summer will also carry some real turbulence before we hit the September 23rd date. Looking at the Solar Eclipse date between August 7 and September 23rd is the target range for a retaliation event.  Looking at Yellowstone and the Pacific, there are some good possible attacks that are overdue. Putin had been extremely calm considering what the global cabal and banksters have done in regards to their money and sanctions, but that will not last much longer.

The gloves will come off soon. Don Jr.’s Russia Meeting Reveals the Power of the Global Magnitsky Act and the power of the Jesuit and Crypto Jew bankers.

We don’t know exactly what was discussed, as details about the meeting are still emerging, and Don Jr. and the Trump administration have been less than forthcoming. We do know that in addition to Veselnitskaya, the president’s son (plus his son-in-law and senior adviser, Jared Kushner, and his campaign chairman at the time, Paul Manafort) met with Rinat Akhmetshin, a Russian-American lobbyist and former Soviet military officer. For his part, Akhmetshin has told the Associated Press, “Veselnitskaya brought with her a plastic folder with printed-out documents that detailed what she believed was the flow of illicit funds to the Democrats.”

But Veselnitskaya and Akhmetshin had something else on their agendas too: A sales pitch for why Donald Trump, if elected, should gut a previously little-known 2012 law, called the “Magnitsky Act,” which holds human rights violators accountable for their actions.

We are now accustomed to the flagrant hypocrisy of US and Western arrogance regarding do as we say and not as we do. The next event may be another Sergei Magnitsky. No doubt the Russians have the dirt on US figures including the Clinton's and Podesta's but the swamp protect both parties and the house in this casino. If Russia wants relief they will have expose their crimes as well and that won't happen. Putin can't kill all of them. Neither can Trump Swamp and the ongoing Clinton-Bush crime syndicate. After the last hit on the Haitian Minister Klaus Eberwein, the kills are as needed to cover their asses but there's a better way and that is to kill many and destroy the evidence.  So where is Building 777 Mr. Trump?

Following Magnitsky’s killing, a bipartisan group of U.S. lawmakers led by Senators John McCain and Ben Cardin championed the legislation that would carry his name, empowering the president to freeze the assets and restrict the travel of persons deemed responsible for his murder and the criminal conspiracy surrounding the firm he represented. Importantly, Congress also authorized the president to levy similar penalties against Russians involved in other serious forms of human rights abuses.

So what happened to John McCain really? The MEM bullshit is laughable. McCain was targeted by the Blue Team and I think the Manchurian China spy McCain was assaulted by special weapons of chemicals.  The news was BS but others are saying it is more serious. McConnell is holding the Trumpcare vote till he recovers but will he? Did he get an adjustment from the Bureau?

Don't you just love this happy horse shit?  The Putin's would love the DC scab McCain to croak like a toad and so would the rest of us.  Seems like that baby's blood may keep he would  the 80 year old kicking. I wonder how the prisoner of war ever made it this long?  Maybe if he spent those years at a Chinese health resort instead of a POW hospital he would survive.

If Putin is not trying to ice him, I think the Trump Swamp may be seeing him as a liability. The reason these cretins never retire is that when they do they become big liabilities should they forget and blurt out something like "we are funding and arming ISIS?" whoops!

Look for some fence mending (assassinations) and other possible events coming or expect the big event to take this Russia-gate and US crime spree off the Pizzagate menu.  And let's all pray we don't get HAARPed or worse, get EMP'd before McCain gets back to the Senate.  When the repeal fails again, the gloves come off. Be ready.

“Revealed: ‘Ordinary ‘citizen’ John McCain dispatched a trusted aide across the Atlantic to [obtain] dirty dossier from ex-spy after former British diplomat told him about blackmail tapes….”
at July 17, 2017 5 comments:

This is your daily Revelation of the Method from the Jesuit agenda to destroy the Catholic Institution (ultimately Christianity) and has all the hallmarks of the Vatican Assassins in a soft coup to get Cardinal Francesco Coccopalmerio to resign and move another Jesuit Insider and Freemason into the position of Congregation of the Doctrine. There may be an internal coup to force some changes in the program. As noted by the following you can see the process and the ultimate agenda in the post changes and possible backlash. The DISCLOSURE should become more obvious as we move forward.

Pope Francis: YOU ARE FIRED!

Let's go way down below this event.

The Pope’s battle to ­reform the Catholic Church risks a serious setback as allegations emerge that his choice for leader of the Vatican’s doctrinal watchdog failed to report a serial sex abuser, allowing the defrocked priest to commit new crimes.

On Saturday the Vatican ­announced that Luis Ladaria Ferrer, a Spanish Jesuit, would lead the Congregation for the Doctrine of the Faith.

He succeeds Gerhard Mueller of Germany, who was denied another five-year term because he was perceived to be dragging his feet on action against pedophile priests, and is thought to oppose the Pope’s compassionate approach to sexual morality.

What is not obvious is the "controlled opposition" of TRUMP and CO. including Jones, the Jesuit Joo-joo-bee and the whole "Swamp" which is global in nature. This coincides with the recent FAKE NEWS of an attempted assassination of Jesuit Homosexual Macron.

Who does Leo Zagami work for?  Who does Alex Jones work for? Who does Donald Trump and the rest of the trained Jesuit Freemasons work for?  The NWO paradigm.  It's sacrificial nature uses a controlled opposition and lambs to the slaughter. Unfortunately the kids are the casualties and the Vatican, City of London and the District of Criminals are not under the laws we are.  This is why Queen Elizabeth escaped Child Trafficking charges and why the rest of this organization will escape any real penalties.  They have been corrupting  and infiltrating religious institutions from day one and the al-chemical wedding of the fake Jew Khazarian and Jesuit Islamic State creators have merged for centuries of collaborative efforts to take control of the banks and churches which one can barely tell the difference these days.

How the Freemasons from the Rose Croix and Fabian Joos group work is in opposition to the Pilgrims and Jesuit Order is a marriage made in hell.  The manifesto is written and available in print. The JOO - JOO - BEES Conspiracy is the ultimate TRIAD of our history and continues in the ancient method of the killing of the spirit.